Harbour Centre is situated beside Vancouver Harbour and at the crossroads between Gastown and the Central Business District.

One of Vancouver’s most iconic landmarks, Harbour Centre has evolved right along with the city itself. Situated beside Vancouver Harbour and at the crossroad between Gastown and the Central Business District, as part of the Hasting West business community we are proud to be a member of the Vancouver Heritage Foundation Places that Matter.

Originating in 1928, Harbour Centre’s roots began when the Spencer family built Spencer Department Store, which sold ladies fashions, perfume and jewellery. Run by “Mr.Chris”, the owner’s son, the store sold a lunch menu that was touted as being “the best in town”. Spencer’s ran the store for close to 20 years before selling it to Eaton’s department store chain in 1948.

Under the new owner, the department store operated as Eaton’s until the 1970s. At that time, Eaton’s sold the store to Sears. The 1970s were a time of great change in Vancouver and in 1977, the Harbour Centre complex, including the office tower and Vancouver Lookout, were built over and around the Spencer Building. Becoming a haven for high tech industries, Harbour Centre embraced its past while meeting the growing needs of downtown Vancouver.

As the 1980s drew to a close, a major functional shift was in store for the Spencer Building. In 1989, Sears moved out and Simon Fraser University moved in. The long-term department store was transformed into the vibrant downtown university campus that it is today.

Now one of Vancouver’s tallest and most iconic buildings, Harbour Centre is truly a landmark in motion and we have helped define Vancouver’s skyline for decades. 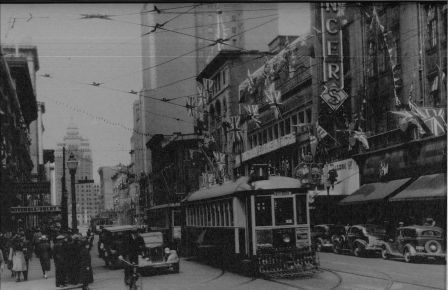